Westward Journey - The Incredible Adventures of an American Boy 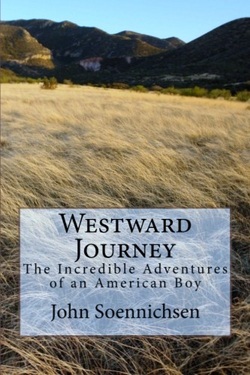 Westward Journey is the story of a teenage boy’s 1849 travels from Michigan Territory to the California gold country.

When his father and mother die within a few weeks of one another, Will Barlow must decide whether to work the family farm alone, or sell out and travel to California with the Wades, a neighboring family who were forced to abandon their home and land.

Opting to leave Michigan, Will begins his cross-country journey with the Wades and soon discovers the dysfunctional relationship between the mysterious couple and their three children. He also inadvertently becomes an advocate for Mary Wade, the pretty, but cheerless wife of the tight-lipped and violent Henry Wade.

Joining a wagon train at Kanesville (Council Bluffs) on the Missouri River, they begin their travels west along the Platte River, where Will meets and befriends a number of other westward-bound pioneers. Among them is Rebecca Baldwin, daughter of wealthy Boston judge Thaddeus Baldwin, who has been appointed to a territorial judgeship in California.

After a few rocky meetings, Will and Becky become very close, but continue to be kept apart by a number of factors along the journey. Chief among these is a decision by some members of the party to split from the wagon train and take a short cut west.

Written from Will’s point of view, Westward Journey combine elements of literary fiction with the kinds of adventurous installments popularized by 19th century writers such as Mark Twain and Charles Dickens.

This new adventure is now available at Amazon.com! You can order it here:
http://www.amazon.com/Westward-Journey-Incredible-Adventures-American/dp/1461142962/ref=pd_rhf_p_t_1

Plus, it's now available as a Kindle book too!
http://www.amazon.com/Westward-Journey-ebook/dp/B0053GC3BA/ref=pd_rhf_p_t_1

The Fat Detective: A Gruesome Tale of Murder, Mayhem, and Bad Puns from the Crime-ridden Streets of Spokane, Washington 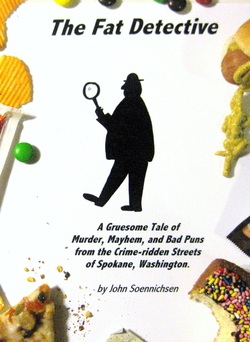 Lance Loomis has a problem.

It’s not that he’s a balding, middle-aged man who is 75 pounds overweight, behind on his rent and in desperate need of female companionship. It’s not the fact that nobody takes him seriously as a private detective and his PI license looks like a library card. It’s not even that he is forced to work out of a janitorial supply closet while his office is being painted. No, these are just minor annoyances in his everyday life.

Loomis’s problem is that he’s entangled in two unsolved murder cases that would baffle even the cleverest detective, which Lance is most definitely not. Who murdered the beautiful redhead as she pedaled her stationary bike? Who ran over the rich tax accountant as he crossed the street carrying Italian takeout?

To solve these two seemingly unrelated crimes, Loomis finds himself interviewing a host of suspects ranging from an egotistical talk show host who calls himself the white man’s Oprah, to an elderly janitor who regularly attends meetings of the New German Social Club. Meanwhile, Loomis has been targeted for death by the Norwegian Mafia.

As Lance patrols the hot, summer streets of Spokane in his 1978 Renault Le Car, he is intermittently assisted by a slimy street hood named Vinny, whom he never actually hired and who is clearly more trouble than help. Loomis also befriends the captivating Jill Morgan, who first appears at his office vacuum-packed in a little black dress, with a tale of murder to tell.

The plot of The Fat Detective recalls the gritty crime stories popularized by writers like Dashiell Hammett and Raymond Chandler, while also paying homage to the comic absurdities of movies such as Airplane and The Naked Gun. The world of Lance Loomis is populated by strange characters, bizarre settings and out of the ordinary occurrences. If compared to the work of other contemporary writers, The Fat Detective might be described as resembling a tag team effort by Carl Hiassen and Dave Barry.

Lance Loomis will never be another Sam Spade or Philip Marlowe. But his reverence for detectives of their ilk drives him on to search for clues, develop theories, and narrowly escape death as he attempts to solve two cases at the same time. All while continually grazing through bags of Cheetos and boxes of frosted mini-donuts.

Horror Beneath the Scablands
A great read, similar to H.P. Lovecraft but more readable and less ominous. Get at Amazon or your local bookstore!