Hardback - Sasquatch Books, 2005
Paperback - The Mountaineers, Fall 2013  This is the paperback edition of the best selling hard back version. The hardback is out of print, so be sure to order this version!  Death Valley is a place of record-breaking heat and unexplained natural oddities, a place where salt beds descend a thousand feet below the surface; where inch-long fish swim in a 112-degree creek; where huge boulders slide mysteriously across a dry lakebed. There are gas stations, convenience stores, a visitor’s center, and a five-star hotel. And despite the modern conveniences, it’s still quite easy to die in Death Valley. John Soennichsen has spent nearly two decades hiking and exploring and observing as much of this forbidding yet fascinating area as possible. Based on journals kept during his travels, the book relates Soennichsen’s experiences in Death Valley and examines the history, geology, and philosophical implications surrounding the area. A compelling look at a region that has long served as a backdrop for movies, television shows, commercials, UFO sightings, rumored ancient civilizations, political aspirations, doomsday prophesiers, and spiritual reawakenings. Live! From Death Valley offers an intriguing glimpse into a monumental landscape that is simply too big to be completely understood in one visit.
To order this book, go to Amazon.com
or Barnes and Noble 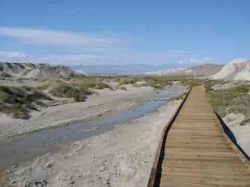 "Part a memoir of his years spent exploring the largest national park outside of Alaska, part an amateur naturalist's appreciation for the geography, flora and fauna of this extreme environment, and part a history of the "crazy humans who did bizarre things" there, Soennichsen skillfully weaves these diverse subjects into a narrative of one of the most fantastic and dangerous places on Earth. Soennichsen first visited the area at age 13, and he returned to hike and explore the region for over two decades. His experiences roused a fascination with the desert, as well as a profound respect for its dangers. Much of the human history of Death Valley over the past 150 years is concerned with mineral prospecting, mining and death by desiccation. Naïve Easterners and Europeans came seeking fortunes in mythical gold and silver mines, wilted under the unforgiving climate and abandoned homesteads and short-lived boom towns. The most significant and lasting result of the mining boom in Death Valley is the large present-day population of wild burros, descendants of miners' jacks and jennies freed when their owners gave up or died. Eloquently written, Soennichsen's book is a triumph of reportage reminiscent of McPhee." 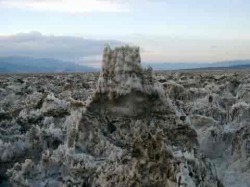 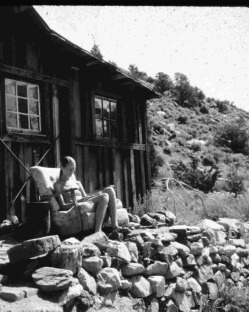 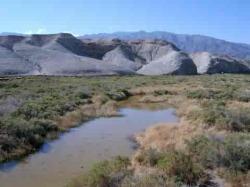 Salt Creek and buttes beyond