The Chinese Exclusion Act of 1882 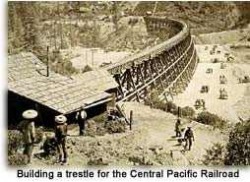 Greenwood Press, a division of ABC-CLIO, Santa Barbara, California
A comprehensive study of the Exclusion Act of 1882 provides an ideal method for students and others to see a living example of a significant piece of legislation in American history, and to observe how such a far-reaching law frequently comprises a complex record of events that both precede and follow its passage. This reference work will discuss the history of the Act.
Leading up to the passage of most significant pieces of U.S. legislation are a collection of events, human emotions, political stances, public outcries, and other factors that fuel its conception, aid in its passage, and contribute to its evolution as a law of the land. Likewise, the life of a legislative act includes not only its early stages of conceptual development, enactment, and implementation, but also public reaction to its enforcement and effectiveness as a law. In the case of some pieces of legislation—the Exclusion Act among them—a complete study must include the Act’s amended forms and ultimate repeal.
The purpose of this book will be to trace the complete history of the Exclusion Act, including the history of Chinese immigration to the United States, conditions that worked to increase their populations here, and eventual efforts to limit further immigration and to encourage the departure of Chinese already here.
The Exclusion Act had an incredibly long history—from the decades leading up to its passage, through its many amended versions and to a point where relations with China had changed and the Act’s repeal seemed to be in the offing. The lessons learned from a study of its entire history are both enlightening and important. This history is presented in chronological order so that events related to the Exclusion Act can unfold slowly and in a logical fashion.
It is hoped that in this fashion, readers will learn to appreciate how early events affect subsequent events and move the entire chronicle along towards its inevitable conclusion.
This book has now been released!
To order this book, go here: http://www.amazon.com/Chinese-Exclusion-Landmarks-American-Mosaic/dp/0313379467/ref=pd_rhf_p_t_1 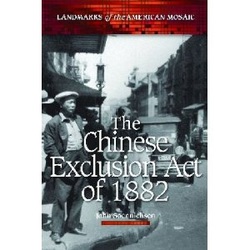