Bretz's Flood: The Remarkable Story of a Rebel Geologist and the World's Greatest Flood

From Publishers Weekly:
"J Harlen Bretz was an unusual geologist: more than a maverick-turned-icon, more than a conscientious and thorough field worker, and more than a demanding professor, he also had a remarkable sense of humor and the strength to persevere despite professional obloquy. Author Soennichsen (Live! From Death Valley) delivers a vivid portrait of the man whose pioneering work began by accident, when a 1921 summer field trip to the Cascade Mountains fell through. Instead, Bretz led his students on foot through the Washington Scablands around Spokane, and returned every summer after with his students and family to map, measure, and record the unique terrain-including the gigantic "ship" of eroded basalt at Grand Coulee and the dried remains of the world's largest waterfall. Bretz's conclusions, of a massive flood unlike anything ever observed, met with intense opposition (largely from those who never observed the Scablands in person). Only over time, and with the advent of aerial photography, were Bretz's ideas confirmed; it's now known that glacial Lake Missoula drained dozens of times, each time unleashing a vast flood across the Pacific Northwest. Soennichsen's book explores a fascinating life in science, and should have appeal for Pacific Northwesterners and science buffs."
To order this book, go to Amazon.com
or Barnes and Noble 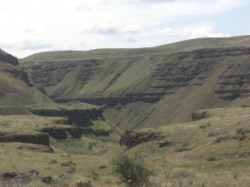 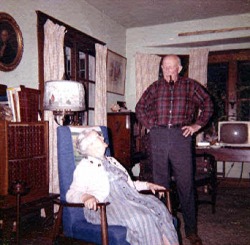 Harlen and Fanny at home in the 70s. 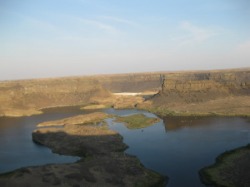 "This is a remarkable and
engaging book, one whose time has
definitely come."
--Scott Waichler, Ice Age Floods Institute

"One of the best scientific whodunits of recent years, Soennichsen's account of Bretz's life and work will appeal to readers interested in geology and the Pacific Northwest."
[c]2010 Book News, Inc., Portland, Oregon

"Bretz's Flood ...has earned a place in my private library alongside the works of Wallace Stegner, Timothy Egan, John McPhee and Loren Eiseley."
--R. David Hammer, Ph.D., US EPA